At Metropolis, we are passionate about creating easy-to-use tracking and reporting software solutions that have a positive impact on the businesses we serve. Our software helps organizations by offering them insight into their voice network so they can reduce costs, improve productivity, increase revenue, and minimize liability.

Our solutions have been installed in several thousand sites in the US and abroad, and our varied customers include hotels, resorts, casinos, call centers, hospitals, school districts, universities, government agencies, military bases and Hollywood studios, among many others.

From our headquarters in Fort Lauderdale, FL, we provide service and support to our reseller partners and end user clients in North America and around the globe. 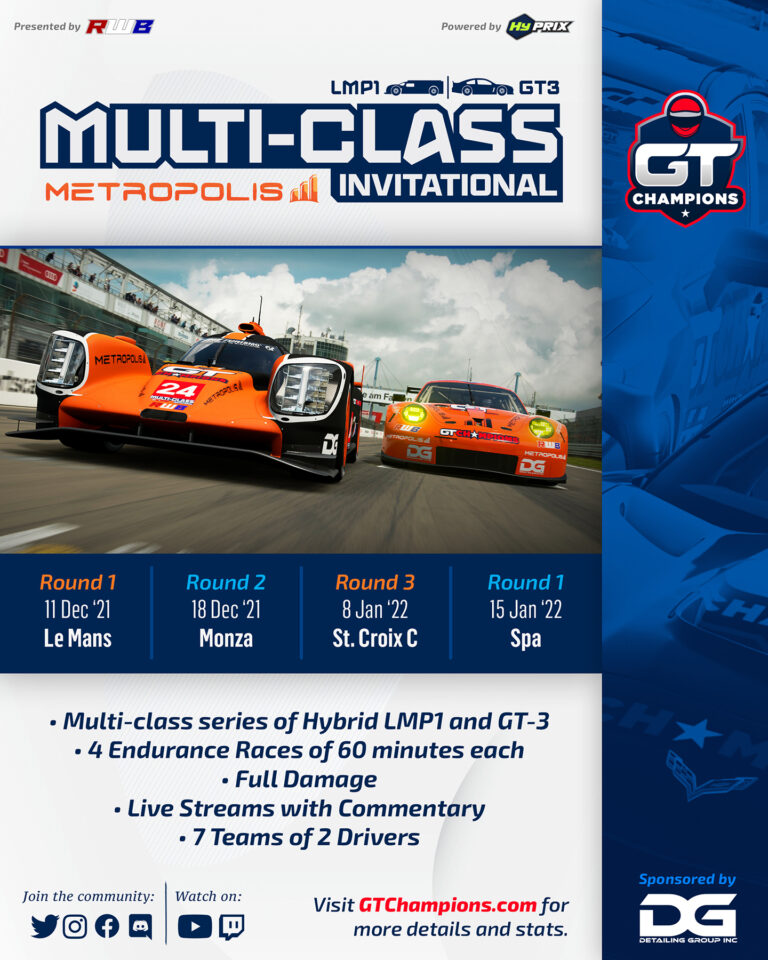 Live Streamed with a commentator for each class.

This is a multi-class series of Hybrid LMP and GT-3 (non-VGT) cars. There will be 7 teams, with 14 drivers total on track. 4 Rounds. Two members per team.

This is truly a world competition, with teams competing for the championship. 60 minute endurance race, with a 15 min qualifier before each round. This is a heavy damage series.

7 Teams, 1 in each class (similar team livery’s encouraged). Drivers pick their own teammates, and each driver will compete in a single class. No trophies this season while we work out the mechanics of this series. Bragging rights for the top driver from each class and the team.
There will be only 3 manufacturers to use, Toyota, Porsche and Audi. Teams will be required to use the same manufacturer on their team. Example, a team that receives the Porsche Team, must use Porsche LMP and 911.
Maximum of 2 manufacturer teams per manufacturer with 1 wildcard. A lottery drawing before each race will be used to determine the MFR that a team will race in the next race. We will draw up to 2 of each MFR, then put all 3 teams back into the hat for the wildcard team.
Example:
Team 1    Toyota
Team 2    Porsche
Team 3    Audi
Team 4    Toyota
Team 5    Porsche
Team 6    Audi
Team 7    One of the 3

You will have a lot of freedom with your Liveries all we ask is you keep it PG, the races will be live streamed so nothing obscene. We will Have Number Placards available for you to get. You will be required to place those on each side of the car and one on the right hand side of the rear of the car.

QUALIFYING for the series:

Qualifying For the series: (if more than 7 teams apply)

All teams would run a qualifier.
Each team member will run their fastest time, and the fastest times would be added together. The top 7 teams with the fastest combined times would earn their way into the series.
1 Out lap, 3 hot laps, 1 in lap. Just like World Cup qualifier. The LMP drivers would qualify in LMP and the GT-3 drivers in GT-3 car.

Each qualifier will be run in GTS Practice/Race. The lobby will be reset after driver meeting, then the qualifier begins. Utilizing the lobby timer in the bottom left, you will have 10 minutes to qualify your fastest time. Crossing the line after the 10 minute timer, marks your end of your qualifying session. REMAIN ON TRACK – AFTER SECTOR 1 – UNTIL RELEASED TO THE PITS. Once all drivers have completed their laps, the grid order will be documented, then drivers will be released to go change tires. There will be a 3 minute break between qualifying and race start. Drivers that leave the track before being released, will be put to the back of their group grid.

1st place in each group will receive 25 points

2nd place in each group will receive 20 points

3rd place in each group will receive 17 points

1. Stuck driver on grid or lobby crash
a. Drivers will have only 3 chances to start.
2. More than 2 cars involved in an accident on the first lap.
3. There will only be 2 red flags to start a race. The 3rd restart will not be red flagged and the race will continue on.
4. Red flags will ONLY be called by the streamers/stewards. If you call red and leave the track, you forfeit your race.

Blue Flags:
In a multi-class event, blue flags are essential to safe driving and overtaking. Here are some of the important blue flag rules to be followed. Keep in mind that it is very possible that you will also have a car within your class that may be lapping you.

GT-3 Class:
1. You WILL be overtaken by LMP class, be aware.
2. Let off the gas when the leader approaches, do not hard brake or full stop.
3. If the leader catches up to you before the apex, take the wider line.
4. If you are racing for position, use fair play and sportsmanship. Do not take advantage of the car you are battling while they yield to the leaders. This goes for both the car(s) defending and the car(s) attacking.
5. Be aware that 1st place is coming, and 2nd and 3rd are likely very close behind. There are 7 LMP cars that will need to get around you, so be aware.

LMP Class:
1. You WILL catch the GT-3 class within the first 20 minutes.
2. Look at the GT-3 Blue flag rules, to make sure you understand what is expected of them.
3. Plan your overtakes carefully. The speed difference is significant, and will provide plenty of opportunities to overtake coming out of corners.

Full Course Yellow: Virtual Safety Car
If a major accident happens between multiple cars, a full course yellow would go into effect (determined by the stewards/streamers).The phrase VSC NOW will be used in chat to convey a Safety Car is in effect. The moment this happens, nobody is allowed to overtake, no matter where they are on track.

1. Any on track incidents can be submitted using the proper incident request form, within 24 hours of race completion time.
2. Stewards will review any and all official submissions.
3. Stewards may also impose penalties for incidents they see during the event, or during post event review.
4. Drivers have 24 hours to dispute a steward official result.

On track penalties must be served on the next straight and/or before crossing the start finish line. A 10 second penalty will be applied to the ending race time for each offense during the race if the penalty is not cleared in the appropriate manner.

1. If a lobby crashes before the race reaches 75% completion, the race will be cancelled, and re-scheduled.
2. If a lobby crashes at or on the 75% completion, the race results will be entered based on information from the live stream(s).
3. Driver disconnects (DC) are a part of life in GTS, and as a result, the driver will be rewarded last place points in their group.
4. If a 2nd driver DC’s, they will receive the next highest points and so on.
5. Rage quits are counted as DNF’s, and will receive zero points for the round, and will start last in the grid in their class.
6. If a driver DNF’s twice, then they are expelled from the series. The remaining driver will run on their own the remainder of the series.

The class you enter in, is the class you stay in for the season. No driver swapping into other class. Obviously life happens, and drivers may have to miss a race.

Team Expulsions:
1.    If any driver on a team is expelled from the series, then the entire team is expelled, and the 1st reserve team will take their place.
2.    So be careful who you choose as a teammate.
3.    DNF’s or Aggressive driving expulsions, we render that driver unable to join the next season, unless the race designers agree to let them back in.